We are very proud to announce that Mr. Janah Risha was honored at an induction ceremony for the Structural Engineers Association of California (SEAOC) College of Fellows on August 30th at the 2019 SEAOC Convention in Squaw Valley. Induction to the College of Fellows is one of the highest honors bestowed on a member of the association for their prominent service and contributions to SEAOC and the Structural Engineering field. 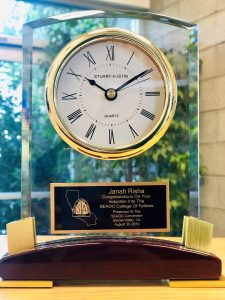 “His service to the profession has included the aforementioned ASCE committee work, but this engineer also provided great service to SEAOC and SEAOSC.

For SEAOC this engineer:
•    Chaired the SEAOC code streamlining committee that lead the way for the Earthquake Design Manual for Low Rise Buildings.
•    Initiated the SEAOC ad-hoc committee on fire hazard and helped develop the Structural Engineering Bulletin to Post Wildfire Site Investigations, which is particularly relevant in this part of California.
•    Served on the Board of Directors
•    Served as President of the Association
•    During his tenure as President, the SEAOC Board unanimously endorsed “more than life safety” as the desired minimum performance level for the seismic design of new structures.

It is his service to SEAOSC that changed the course of the Association, by helping to save it from an impending financial disaster, and then starting to turn the ship to a new direction.

•    He, along with other SEAOSC leaders, got together to initiate and
implement the SEAOSC re-alignment plan which saved the Association from bankruptcy and resulted in the vibrant, strong, and relevant
SEAOSC of today.

•    He helped to develop and launch the first Buildings at Risk summit.
This event reached out beyond our engineer members to engage
the community and political leaders to get them talking about
earthquakes and building performance. This effort planted the seeds for the future adoption of the soft-story wood-framed and non-ductile concrete ordinances in southern California.”

We at Risha Engineering would like to congratulate Janah for this incredible honor and accomplishment! 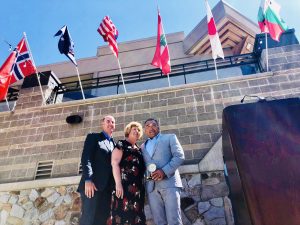 “It is said that praise from the praise-worthy is beyond all rewards.

For recognizing my commitment to SEAOSC and the profession, I thank the SEAOSC Board and the nominations committee, who are all praiseworthy in my eyes. For allowing me to serve by their side and to occasionally lead, I thank my colleagues on the various committees, SEAOSC, and SEAOC Boards.  As we all know too well, no one person can achieve much alone.  It is through our lively and civil debates and thoughtful crafting of our goals, followed by relentless action, that together we can do so much.”